Homebrewing beer is a delicate process. Unfortunately, sometimes it doesn’t turn out right. One of the most common problems you may encounter in the homebrewing process is your beer ending up sour.

Sour beer occurs when the beer gets infected with wild yeast or bacteria. This is very common, and while it will produce a sour smell and flavor, it’s not dangerous to consume. The best way to fix sour beer is to add additional ingredients to change the flavor, such as fruit.

In the rest of this article, I’ll discuss why your beer ends up sour and what you can do to fix it.

1. Wild Yeast Has Infected the Beer

Yeast is an absolute necessity to make beer. The yeast is what gives the beer its primary flavor. This is one of the reasons when the beer gets infected with wild yeast, the beer often turns sour. It all comes down to how the yeast interacts with the beer.

Beer is typically made with one of two different types of yeast: ale yeasts and lager yeasts. I’ll discuss these more in-depth in the following sections.

Ale yeasts are what are known as top-fermenting yeasts. They’ve been given their name because the fermenting process happens at the top of the beer. This is because the yeast is traveling upwards.

Typically the fermentation process is quicker with ale yeasts. This is one of the reasons it’s more common to use this yeast over other types.

While ale yeasts derived their namesake from being used in ale, this type of yeast is often used in other varieties of beer, including wheat beers, stouts, and porters.

Lager yeasts are the opposite of their ale yeast counterparts. These yeasts are known as bottom-fermenting yeasts since fermentation typically takes place on the bottom of the beer.

Interestingly, the yeast doesn’t actually settle on the bottom of the vessel with bottom-fermenting yeasts. Instead, the yeast maintains a low to medium height in the vessel, remaining suspended throughout the process. This helps to reduce some unwanted flavors in the beer.

Now let’s go back to wild yeast and how it typically affects beer’s flavor. Only one type of wild yeast usually infects homebrew beer – Brettanomyces.

Wild yeast strains are always floating in the air around us, most often coming off of the skins of fruits. If your homebrew is not properly contained, you can expect one of these strains to make its way into your beer at some point.

The real difference between wild yeasts and domesticated yeasts is that wild yeasts undergo a process of mixed fermentation. Clean beer is fermented with a type of yeast known as saccharomyces. This type of yeast is singular, meaning you only get the flavors from one yeast strain.

How Brettanomyces Affects Your Homebrew

As you would expect, Brettanomyces (aka brett) causes your beer to turn sour very quickly. Brett is the most common strain of yeast used in the intentional and accidental production of sour beer.

Brett can cause your beer to have a wide range of flavors ranging from fruity to smoky and an entire range in between. The beer’s flavors are influenced by what acids and alcohols are available for the wild yeast to mix with.

Brett works in a similar way to Saccharomyces in that they both ferment the beer. The main difference is that brett works significantly slower, and the flavors come out over time. This is one of the reasons why brett turns the beer sour.

Sometimes when brett is introduced to your homebrew, it can take years before you know the full flavor of the beer.

What You Can Do To Fix It

Once your beer has been infected with wild yeasts, there’s no way to just remove the yeast. The fermentation process has already begun. This is going to leave you with two options – either dump the beer or play with the sour flavors to produce something delicious.

However, if you’re trying to avoid sour beers, the best thing you can do for prevention is to keep your beer vessels as tightly sealed as possible. Try keeping your homebrew in a more protected area, such as a closed storage unit. You’ll also want to sanitize your beer equipment.

I would encourage you not to dump the beer if it’s become infected. There are a variety of ways you can enhance the flavor of the beer. Instead, I would suggest adding various fruits and other flavors.

2. Bacteria Has Infected Your Beer

Both of these bacteria work similarly, and trust me, it’s not as gross as you might think. In fact, bacteria can be found in various dishes you consume every day, including cheeses, yogurt, kimchi, and Kiefer.

Let’s get into the details of each one and how they turn your beer sour.

Lactobacillus, sometimes referred to as lacto, acts relatively similarly to various yeasts once it gets into your homebrew. This bacteria gets inside the beer and begins eating all the sugars in your wort.

So, what’s the difference? When lacto eats the sugar, it converts into lactic acid rather than alcohol. Lactic acid is the biggest reason why your beer turns sour after it’s been infected with lactobacillus.

The lactic acid lowers the beer’s pH relatively quickly. Sometimes this process can happen in as soon as one or two days. Once the pH is lowered, the beer begins to turn acidic, and you’re left with a sour flavor.

Pediococcus, sometimes referred to as pedio, works very similarly to lactobacillus in that they are both producers of lactic acid. Pedio can be found in the production of a variety of other dishes, including sauerkraut and some dried sausages.

However, the difference between these two strains of bacteria is in the time it takes for the lactic acid to lower the pH level completely. This is why when your homebrew becomes infected with pedio, it may take some time before you even notice that it has turned sour.

Another major difference between these two bacteria is the amount of sourness that gets produced. Brett tends to produce a clean sour taste, while pedio can create all kinds of different flavors that go far beyond simply sour. If your beer has an extremely harsh flavor or tastes rancid, it’s probably due to coming in contact with pedio.

You may also find the beer has a buttery flavor if it’s encountered pediococcus. This strain of bacteria produces high concentrations of diacetyl, the chemical responsible for giving your homebrew a buttery flavor.

What Is Lactic Acid and How Does It Affect Homebrew?

Lactic acid is found in a surprisingly large amount of our foods. Some of the things you may have tried that have lactic acid include:

Lactic acid lowers the pH level of your food or drinks, causing them to become more acidic and, as a result, more sour. High acidity and sourness are two peas in a pod.

In lower concentrations, lactic acid will cause your homebrew to have a more mellow and tangy flavor, similar to yogurt. However, as the concentration rises, you can expect the flavor will become significantly sharper and more biting, similar to biting into a lemon.

What You Can Do To Fix It

Similar to wild yeasts, there is no way to remove the bacteria once it has entered into your homebrew. The only thing you can do is dump the batch or try to make it drinkable.

If you’re dealing with lacto, you’ll likely be able to drink the sour beer. However, if you’re not a fan of the taste, you can add various ingredients to change the flavor. Try adding different types of sugars, fruits, and so on to see if you can find a flavor you enjoy.

Wild yeast and bacteria both travel through the air to reach your homebrew. The worst part is they’re found nearly everywhere. There’s no way to keep your beer completely away from them. However, there are some steps you can take to lessen the possibility of infection.

The best thing you can do is to avoid opening your fermenter lid unless you absolutely have to. The yeast and bacteria will be all around you and in the space you’re brewing the beer in. There’s no avoiding that. However, if you can keep the lid tightly closed throughout the fermentation process, it’s significantly more likely that it won’t become infected.

Another thing you can do is clean your equipment frequently. If the equipment is left in the open air and then used, you’re sure to run into an issue with brett, lacto, and pedio. Just think of them like the three stooges of homebrew beer – it’s going to go wrong if they’re around.

You’re more likely to run into an issue with wild yeast if you’re adding fruit to your homebrew. Wild yeast loves to hang out on the skin of various fruits, and if it’s not cleaned well before you add it into the homebrew, the yeast will make itself at home in the fermentation process.

If you’ve decided not to throw out your sour beer, this is the section for you. When it comes to sour beer, flavors range from mild and tangy to strong and tart. There’s no specific type of sour, but I want to discuss some of the primary types of sour beer you might look at making if you’ve had a batch go wrong:

Sour beer is really only made two ways – either through encountering wild yeast or wild bacteria. The yeast and the bacteria will both produce sour flavoring, but they each vary in strength and acid content.

Additionally, sour beer (whether made accidentally or on purpose), has its place in the world just like any other beer. The important thing to remember is that just because you accidentally made a batch doesn’t mean it has to go to waste. There are tons of different things you can do with sour beer, and who knows? It just may become your next favorite. 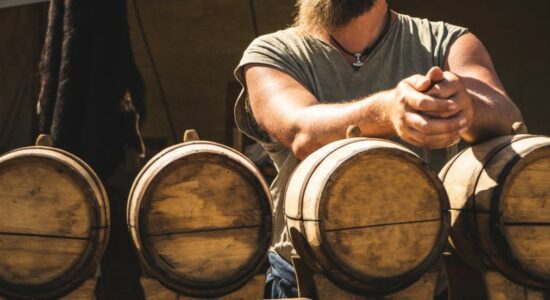