Ale vs. Lager – The Difference Explained 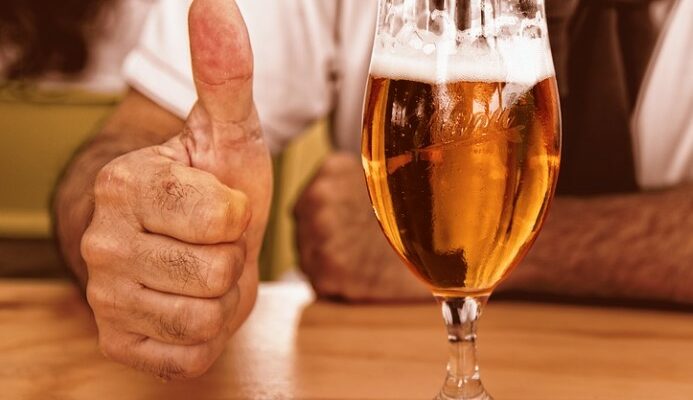 Beer is the world’s favorite alcoholic beverage, with 170 billion liters consumed yearly. There are different types of beer, and among them are the popular ales and lagers. So what’s the difference between them?

Ales and lagers are differentiated mainly by the yeast used in their fermentation. When brewing ale, a common yeast is used. This yeast thrives in warm temperatures, usually 60-75°F (16-23.9°C). Lager brewing uses a slow-working yeast that works in cold temperatures of 35-45°F (1.6-7.2°C).

The yeast strain affects the brewing pace and the overall fermentation process that differentiates ales from lagers. In this article, I’ll explain all the differences between these two beer categories.

Are Ales and Lagers the Same?

There are more similarities than differences between an ale and a lager. That’s not surprising, considering that until the 16th century, all beer was ale.

Ales and lagers are produced with the same primary ingredients – water, grain, hops, and yeast. They are also made through a similar process: fermentation.

To understand how beer is made and the ingredients that go into it, read my article, How To Make Beer at Home (Easy and Basic Step-by-Step).

However, ale and lager are not the same. Most of the differences relate to

Ale vs. Lager – The Differences

Here’s a quick overview of the differences between ale and lager.

The Yeast is Different

The main difference between ale and lager lies in the yeast used in their fermentation. Yeast, a crucial ingredient in beer production, consumes the sugar in the wort and turns it into alcohol.

Yeast is a fungus invisible to the naked eye. It was not considered an ingredient of beer, mead, or other alcoholic beverages until the 1800s because no one knew it existed.

Ale is fermented with saccharomyces cerevisiae, a top-fermenting yeast that consumes sugar faster in warm temperatures of 60-70°F (16-21.6°C).

Lager is made with saccharomyces pastorianus, a bottom-fermenting yeast that works best in cold temperatures of 35-45°F (1.7-7.2°C). At these temperatures, ale yeast is dormant.

Lager beer has existed in Bavaria since the 16th century, but it was not until the 1900s that a separate lager yeast strain was identified.

That begs the question: how did a cold-fermenting yeast become endemic to a particular region?

One theory attributes this to a 1553 Bavarian edict prohibiting brewing in summer. The edict led brewers to unknowingly use yeast strains that could withstand Bavaria’s winter cold. The yeast evolved as it adapted to the cold, eventually thriving in cold conditions.

With lager yeast, the yeast forms clumps at the bottom of the tank. This bottom-fermenting process works best in cold temperatures.

Read my article, How To Brew Lager Beer (Step-by-Step Guide), for a step-by-step guide on brewing lager beer.

In contrast, ale yeast, placed in warmer temperatures, can speed up the process of fermentation. As part of that process, the yeast rises before settling at the bottom of the fermenter.

The term “lager” comes from the German “lagern,” which means “to store.” It refers to the long period the beer was traditionally stored in cold caves to allow it to mature.

After primary fermentation, lagers undergo a long conditioning phase when they are stored in refrigerated facilities. The beer continues to ferment while in cold storage.

This cold conditioning has a few objectives:

Ale yeast, on the other hand, ferments faster in warm environments, so ales require only a short period of conditioning at ambient temperatures.

Ale is Brewed Faster Than Lager

Ales can be produced in a shorter time than lagers because the warm fermentation enables the beer to mature faster. You can make a good ale in just one week, although a good ale usually takes 2-4 weeks to fully mature.

On the other hand, cold fermentation slows down a yeast’s capability to convert sugar into alcohol. As a result, lagers age slower, with production typically taking 4-8 weeks.

There’s a Difference in Taste

Apart from being more flavorful, ales have a strong taste because they tend to have higher alcohol content. The warm fermentation allows ale yeast to convert sugar into alcohol faster.

In the case of lager, byproducts from the cold fermentation are minimal, accentuating malt and hops flavors and giving the beer its “clean and crisp” taste.

There are many different types of ales and lagers. Ales include stouts, porters, pale ales, and wheat beer, while pilsner is the most popular lager.

Ale vs. Lager – Which Is More Popular?

Although ale was the original beer with a recorded history that goes back more than 4,000 years, lagers are now more popular. Lagers dominate the beer market, accounting for more than 75% of the $680 billion global sales revenue.

However, ale production has recently increased, with craft beer gaining popularity. Craft breweries favor ale production as they don’t have the space to store and condition lager beer.

Ales and lagers are differentiated by the yeast used in their fermentation and how they are fermented. Although beer lovers constantly debate the merits of ale and lager, one is not better than the other.

Leave the choice to your palate; taste the difference and choose the one that you find more refreshing!