4 Signs Your Homebrew Is Ready To Bottle 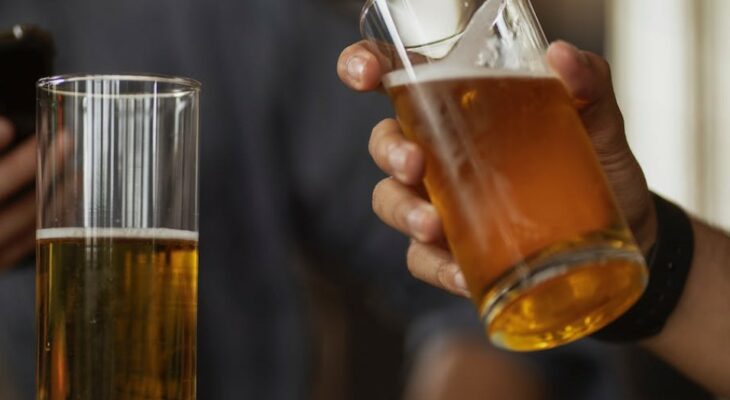 Homebrewing is a labor of love. The craft requires patience, attention, and care. While a homebrewer’s enthusiasm for their beer may tempt them to rush the process, it’s imperative to allow the time necessary for fermentation to complete before bottling your beverage.

Completed fermentation is the primary indicator that your homebrew is ready to bottle. There are many indicators that the process is complete, including visual components, flavor, and hydrometer readings. Bottling too early or too late in the fermentation process risks ruining your beer.

This article will look at how long different types of beer take to complete, as well as looking at the physical elements that indicate a brew is ready to bottle. We discuss the risks of bottling too early or too late, as well as offer suggestions for storage and completing the bottling process.

Fermentation is a pivotal part of the homebrew process. Yeast eats sugar, creating alcohol. Additionally, the process creates a beer’s flavor profile. Different types of beer require different fermentation times. However, beer should never be bottled before fermentation is complete.

If you’ve bottled your beer before the fermentation process is finished, you’ll end up with a super flat beer with little to no carbonation. It’s important to have a little bit of patience with this process, and only begin bottling your homebrew once you’re sure fermentation is complete.

There are certain conditions you’ll need to provide your homebrew for the perfect beer. There are three major factors that influence the fermentation process:

You can’t bottle your beer until it’s fermented. The brew exhibits visual signs that fermentation is occurring correctly. Brewers should closely monitor the airlock, the yeast, and the beer’s foam to ensure fermentation is happening perfectly.

Fermentation creates gasses that need to exit the fermentation container. The process produces a considerable amount of carbon dioxide, which increases the pressure in the fermenter.

Once the internal container pressure surpasses the external ambient pressure, the bubbles of carbon dioxide push up and through the airlock.

As the yeast eats sugar, it leaves behind by-products. These residual components consist of:

This thick layer is called krausen. More than simply a beer’s detritus, krausen protects a brew from infections.

Krausen is at its thickest in fermentation’s early stages. As the fermentation winds down, the proteins in krausen bond together in a process called flocculation. The bonded elements gain heft and sink to the bottom of the beer.

Krausen dispersing and sinking is a good indicator that fermentation is complete.

How Long Does Fermentation Take

Different kinds of beers require different fermentation times. Darker grains need more extended periods to mellow and settle. Fermentation affects both the alcohol level and the taste of a beer. Most brews require both a primary and secondary fermentation period.

Primary fermentation is the phase where a beer produces its alcohol and carbonation. Yeast eats the sugar in the wort, creating alcohol. Brews undergo visible changes during this period. A thick foam called krausen forms on the top of the beer. This substance is made of:

Additionally, a fermenter’s airlock produces bubbles throughout this process. These bubbles fill the airlock regularly throughout fermentation. Primary fermentation is complete when the yeast has consumed the majority of fermentable sugars.

The process usually takes two to seven days. During this time, keep a good eye on your homebrew.

Secondary fermentation is additionally when any additives, like fruit or hops, are mixed into a beer.

There is some debate about whether or not brewers should move their beer into a new vessel for secondary fermentation. While it isn’t imperative, moving your beer to a different container can help clear your brew.

Secondary fermentation times vary depending on beer types, ranging from two to three weeks to a full year.

Pale lagers ferment relatively quickly; however, the process must be completed at colder temperatures, which prolongs the wait time. Lagers ferment at 45 to 55 degrees Fahrenheit—cold temperatures slow fermentation.

Amber lagers are named after their color. The beers are copper-colored, owing to the presence of caramel or black patent malts. Ambers ferment longer than pale lagers, allowing more time for the flavors to mellow and meld.

Dark lagers, also called dunkels, gain their opaque color from the dark roasted malts used to brew the beer. Dunkels use large quantities of malt extracts, requiring prolonged fermentation periods. Allow plenty of time for the beer’s bitterness to mellow out of the brew.

Pale ales include a range of light-colored beers. Brewers use pale malts to make the beer, giving it both its flavor and color.

You have a lot of agency in a pale ale’s fermentation. The beer doesn’t require long fermentation periods; it just needs to clear to your contentment level.

Allow a pale ale one week of primary fermentation, followed by one to two weeks of secondary.

Amber ales are darker than pale ales. The beers taste like caramel and toffee, owing to the presence of caramel and crystal malts. Amber ales include:

Darker grains take longer to ferment. Even a little extra time makes a big difference in taste. An amber ale clearing does not indicate complete fermentation, so be sure to allow the full 2 to 3 weeks of secondary fermentation.

As the name suggests, dark ales rely on highly roasted grains. If you don’t allow these malts enough time to ferment and mellow, your beer will have a bitter, burnt flavor.

Allow one week for primary fermentation and between three and four weeks for secondary. The longer a dark ale ferments, the better the flavor, so be patient.

Any beer above seven percent alcohol by volume it’s considered high alcohol. These brews require considerable time to ferment. High alcohol beer brewing isn’t for those who prefer their gratification to be instant.

Prepare to wait over a year to enjoy your high-alcohol beer. Allow two weeks of primary fermentations, followed by nine to twelve months of secondary.

Do Not Over-Ferment Your Beer

Over-fermentation can result in yeast autolysis. Yeast autolysis is the process through which yeast dies, and the grain’s cells wear thin. The particles then crack open and leak foul-tasting substances into the brew.

The yeast’s insides infuse the beer with the following potential tastes:

Some have described the taste as a “dirty diaper,” like a flavor no brewer wants to infect their beer with.

2. The Beer is Clear

Floating yeast often indicates that fermentation is still occurring. A cloudy beer needs to continue fermenting. When a beer clears, the yeast has flocculated and sunk to the bottom. This indicates fermentation is complete, and the brew is ready to be bottled.

This method is not foolproof and should not be used in isolation. Some beers are hazy by design, including:

Familiarize yourself with the intended appearance of your brew and plan accordingly.

Fun fact: in some cases, you can reuse yeast! Check out this YouTube video from Home Brew Advice for more information:

Hydrometers measure a liquid’s density. If the thickness of the fluid continues to fall, it means the yeast is still eating sugar, and fermentation isn’t complete.

Three consecutive hydrometer readings indicate that the yeast is no longer eating the sugar, meaning fermentation is complete.

This may seem obvious, but beer’s taste is the surest indicator that the brew is ready for bottling. Fully fermented beers only lack carbonation, so the drinks taste like tepid, flat versions of the final product.

Yeast eats most of a beer’s sugar during the fermentation process. An incomplete beer still has fermentable sugars present and will taste sweeter as a result.

Taste a small sample of your brew; if it tastes like the variety of beer you are making, fermentation is complete. If it tastes sweet, the brew needs more time.

Risks of Bottling Your Beer Too Early

Correctly timing the bottling of your beer is essential. Early bottling risks complete ruination of the batch. Early bottling results in a build-up of carbon dioxide. The excess gas expands and can cause bottles to burst.

Besides the apparent risks posed by broken bottles, all of the effort and ingredients you’ve put into your homebrew will end up wasted and ruined.

How To Bottle Beer

Once your beer is fermented, it’s ready to bottle. You’ll need the following to complete the process:

Begin by racking your beer. Beer racking separates your brew from its trub. Trub is the leftover gunk that comes from yeast flocculation and the fermentation process.

Siphon beer from the fermentor into your bottling bucket. Beyond separating the brew from the trub, this process also helps mix your priming sugar into the recipe. Priming sugar is essential for creating carbonation in your beer.

Sanitization is essential to every stage of the fermentation process. Make sure the bottles are free of any dirt or residue, as these particulates will impact your beer. Dry the vessels thoroughly before filling them.

Use the siphon to fill the beer bottles, and then cap them.

Just because your beer is bottled doesn’t mean it’s ready to drink. Beer needs to carbonate after it’s been capped. The priming sugar in the mix creates carbon dioxide that absorbs back into the beer, creating carbonation.

Store your beer bottles in a cool place to expedite the process. Allow it to sit for seven to ten days before drinking. Besides creating carbonation, allowing your bottled beer to sit also provides an opportunity for lingering proteins to clear and sink to the bottom of the bottle.

Additionally, you want to keep your beer bottles in a darkened space, as direct sunlight exposure damages a brew.

The longer you allow your beer to rest, the more the flavor develops, so don’t rush the process.