Why Is Your Homebrew Beer Frothy? Causes and Solutions 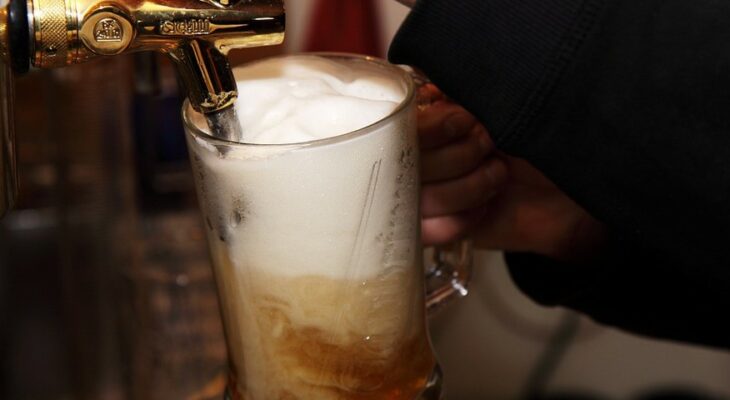 A successfully executed homebrew is a coup for every artisan creating the drink. The perfect beer contains just the right amount of foam for its body.

Your homebrew is frothy because it has been overcarbonated during bottle conditioning or in the keg. It could also be frothy due to infection. You can fix overcarbonation by cooling the beer, letting it sit, and recapping it. Sadly, there’s no fix for an infection.

Too much foam can simply be a nuisance, making the pouring process harder and slower. This article discusses the causes and solutions and explains the basic chemical reactions that create a beer’s head.

Before discussing why your homebrew beer might be frothy, it’s worth providing an in-depth explanation of carbonation.

Carbonation is the bubbly by-product of fermentation. Homebrewing requires a surprising amount of chemistry and never is that clearer than in the carbonation process. Put simply, yeast and sugar cause a chemical reaction called fermentation, which produces alcohol. However, it also produces carbon dioxide.

Some homebrewers choose to create carbonation by adding extra sugar to their recipe when they bottle their beer. The beer’s yeast consumes the added sugar, creating carbon dioxide, which becomes trapped in the bottle. The brew absorbs this carbon dioxide, resulting in carbonation.

While this method is effective, it requires care and patience. Brewers make three crucial mistakes that lead to over-carbonation during bottle conditioning:

Beer brewing requires precision, and using too much sugar causes the yeast to create too much carbon dioxide, resulting in excessive foam. Even seasoned brewers may struggle to determine the perfect measure of priming sugar, partially because there are so many different options.

Brewers can use any of the following to create carbonation in the priming stage:

Determining the correct amount of sugars needed requires some degree of trial and error.

Patience is absolutely imperative to the homebrewing process. Rushed fermentation creates attenuated yeast, and every beer has an ideal Final Gravity measure. This number indicates the sugars that simply could not be fermented, indicating that the process is complete and the yeast will stop consuming it and creating carbon dioxide.

Brewers should allow their beer to reach the appropriate Final Gravity before bottling; otherwise, the yeast will continue eating the sugar and the priming sugar, leading to far too much carbonation and foam.

Thankfully, an over-carbonated bottle of beer is not beyond redemption. A few simple tricks and techniques can reduce the foam levels in your brew:

Cooled beer doesn’t so much reduce carbonation as it minimizes foaming. If over-carbonation isn’t impacting the taste of your beer but is creating geysers of fizz, cooling the brew down can help.

Once again, patience comes into play. Let your over-carbonated beer sit for a while because the longer it sits, the less carbonated it becomes.

Keep the beer in the refrigerator because cold yeast becomes dormant, halting the carbonation process and preventing the creation of any new foam.

Re-capping bottles requires time and patience; however, it is the surest method for carbonation reduction.

Set aside several hours because this won’t happen quickly and can’t be rushed. Here’s how to re-cap your beer:

Keg-forced carbonation is simpler than bottle conditioning and provides less of a margin for human error. Carbon dioxide canisters push the gas into the keg, creating carbonation and foam.

Brewers who keg-force carbonation sometimes fall prey to a desire to rush the process. Patience may seem like a cliche at this point, but it once again will spare homebrewers the headache of excessive foam. It’s not a good idea to hurry carbonation by setting the canister too high.

Brewers can save overly carbonated kegs by purging their headspace.

The above steps force the chemical reactions that create foam and allow you to siphon off the carbon gas it causes.

Do not immediately reattach the gas line after this process. Allow your keg to sit for several hours, and when you do reattach the line, set the carbon dioxide pressure to 10 PSI.

Not all over-carbonation results from human error. Sometimes a strain of yeast goes rogue and continues consuming sugar and creating carbon dioxide beyond the desired amount.

Many things can cause infections. The best course of action to counteract the possibility of one developing is ensuring that your equipment is sanitized and nothing undesirable enters your recipe.

An infection announces itself with a foul or off-taste. While simple over-carbonation primarily causes excessive foam, infections also create an unpleasant flavor.

Unfortunately, there is no counter-attack to infection. If you believe that an infection is causing your beer to be too frothy, the only sensible course of action is to cut your losses, and get rid of the batch. Chalking the problem up to experience and learning from it can help you prevent it from happening in the future.

Chemistry and math impact a homebrew’s foam. However, no learned skill surpasses the importance of patience. Allow your beer the time it needs to ferment properly; don’t rush the process; always measure twice, and your homebrew will form the perfect measure of head.